Apparently there are still some Filipinos who find humor in one’s ethnicity, branding them, brandishing them to elicit laughter. A classical example is this tweet that was tagged to my timeline by a concerned follower, @baklushdiana.

@pinoy_humor: English ka ng english, mukha ka namang Igorot. (You keep on speaking in English when your face looks like an Igorot).

Initially I took it lightly and thus I replied:

In all fairness to @pinoy_humor, he/she/it apologized saying “sorry po doc.. hindi na mauulet.:-(” [sorry doctor, it wont happen again 😦 ]. However, I was already mincing what that joke was all about and thus warned him/her/it. I replied, “that was a bad ethnic joke. Wag ka papakilala, mapupugutan ka ng ulo dito.” (“that was a bad ethnic joke. Dont reveal your identity or you will be beheaded here.” — Igorots had been previously known to be headhunters) 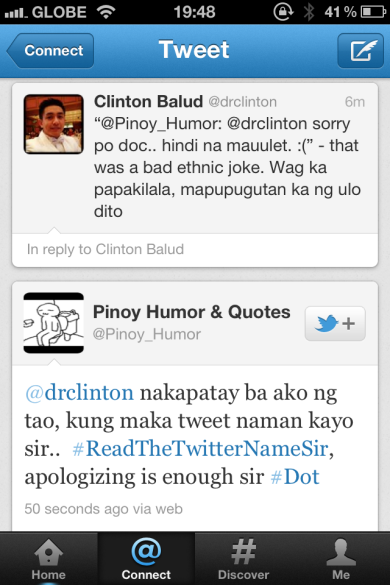 And then I asked him/her/it:

@Pinoy_Humor: @drclinton At first I found it funny but I decided to delete it when I thought my followers like you will get mad.

Instead of me trying to accept her initial apology, I was getting enraged and asked him/her/it:

@Pinoy_Humor : @drclinton Again I’m sorry. This will be my last tweet.

Shocked and angry, I screen captured that particular tweet and asked my followers if they find the tweet funny or humorous at all. In unison, everyone thought it was not humorous nor funny, it was offensive and discriminating against a fellow Filipino.