When One of the Twins Die In Utero

08 Oct
Did you always think that when a mother conceives twins, triplets, quadruplets or more, all of the fetus will be born alive? As morbid as it maybe, some fetus/fetuses die prematurely even before being born. Some may die within the first, 2nd or 3rd trimester (3 months). And their death can bring about complication/s not only to the mother, but to the remaining twin as well.
The effect of the fetal death to the surviving twin may vary according to the timing of the death. In a data published 1994, loss of one twin at the first trimester does not impair the development of the surviving fetus. (Some are completely resorbed in a condition termed as “vanishing twin syndrome.”) In the second trimester however, this is associated with increased risk for the survivor as reflected by a high incidence of growth retardation, premature labor and perinatal mortality.
An observation of twin pregnancies where single fetal death occurred after 20 weeks of gestation, the mothers were known to have preeclampsia which may also prompt babies to be delivered prematurely. The surviving twin aside from being delivered prematurely, they are also observed to be with intrauterine growth restriction. This could be an effect of the death of the other twin, or that and the effect of preeclampsia wherein the blood flow to the fetus may become diminished. This in turn causes diminished delivery of oxygen and nutrients to the baby thus. Head MRI and ultrasound of these survivors revealed some neurologic injury. Fortunately, in these mothers, there was no detected abnormality on coagulation profile.
A similar observational study was also done among twin pregnancies where a single fetal death occurred after 20 weeks of gestation. The study showed that the main cause of the fetal death was twin-to-twin transfusion syndrome. The survivors were also delivered prematurely and later also died after birth because of the same cause. (TTTS is due to abnormal communication between the blood vessels supplying the placenta of both, leading to shunting of more blood to the other twin while deprivation of the other one. One may die immediately while still in utero, while the other may survive or end up hydropic; or both may survive with severe physical discrepancy — see my other blogs on hydrops fetalis).
Another in depth observation was done among twin pregnancies complicated by single intrauterine fetal death after 26 weeks of gestation. Chorionicity of the twin pregnancies was noted (see illustration below on the types of twin pregnancy according to chorionicity).

(Image courtesy of  http://www.health.sa.gov.au/ppg/Default.aspx?PageContentMode=1&tabid=75)
Often times, the surviving twin was delivered prematurely, and that baby ended up with intrauterine growth restriction. The mother on the other hand had preeclampsia and gestational diabetes, both of which may also lead to the growth restriction of the surviving twin. In cases of monochorionic pregnancies, again twin-to-twin transfusion syndrome afflicted the babies. Some of the twin eventually died as well in utero (before being delivered), while others after birth. Also, ultrasound of the baby’s head should cerebral anomalies in some.
Even if one of the twins survive after the death of the other, and gets delivered, it is not reassuring that he will live and be discharged as well baby as his outcome may be compromised by the complications of premature birth, or presence of neurologic injury. 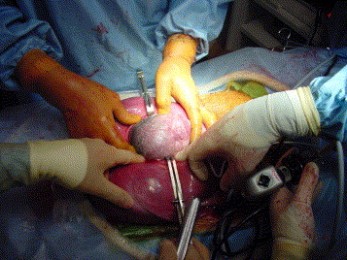 During my training, I was lucky to witness a case of hydrops fetalis undergo a rare form of management done in our institution.

During the prenatal course, the obstetrician noted the baby to have hydrops fetalis. Serial ultrasound established the diagnosis and at the time the baby was nearing birth, the condition persisted.

As in my previous articles, hydrops means the generalized swelling of a fetus. The skin becomes edematous and very taut, disabling a good expansion of the chest when breathing. The pleural space, where the lungs float is also filled with fluids, compressing the lungs. So once the lungs becomes occupied by air after birth, there will be difficulty of the lungs to expand. The pericardial cavity, which the heart occupies, may also be fluid filled. Abdominal cavity may also contain fluid, termed ascites. At least 2 of these 3rd spaces must be involved before diagnosis could be entertained in an individual.

On the baby’s latest ultrasound, it was noted that the right lung has pleural effusion, the left lung was spared. In order to manage the baby optimally at birth, a pre-natal conference among all parties involved in the delivery of the baby was called – the perinatologist, neonatologist, and pediatric surgeon, to discuss how the delivery process will take place. At that time that this was done, the unang yakap was still in conception so it was not employed in this particular delivery.

The perinatologist wanted to employ EXIT – extrauterine intrapartum treatment. This means that the treatment will happen when the baby is out of the uterus but is still within the confines of the delivery procedure (umbilical cord remains uncut).

1.The baby was delivered via emergency section. He was brought out of the uterus, the umbilical cord still connected to the placenta.

2. The pediatric surgeon inserted a needled through the right pleural space, drained fluid as much. (The purpose of doing this is to allow maximum expansion of the lungs when it gets aerated; the fluid, if not evacuated, will limit the expansion of the lungs leading to poor tidal volume, lesser oxygenation of the blood, which will aggravate the already compromised baby).

3. Umbilical cord was then cut and baby was handed to the neonatology team.

4. Neonatologist then intubated the baby.

5. Chest x-ray was done to document the level of the tip of the endotracheal tube, check how much of the fluid was drained, and check how expanded the lung after the procedure.

In short, the procedure was successful. We were able to ventilate the baby afterwards. Baby however had other pressing problems, and as expected he when through persistent pulmonary hypertension, or persistent fetal circulation. PPHN or PFC usually results from a thickening of the walls of the arterioles/capillaries that surround the lung alveoli. Because of this thickness, oxygen travels slowly from the alveolar space into the bloodstream, thus leading to lesser oxygenation of the blood. PPHN can be primary (no identifiable cause) or secondary (a result or effect of another primary disorder). In this case, if the baby, who has hydrops fetalis, also has PPHN, it would only mean than the hydrops was a chronic disorder that it has affected the development of the lung tissue and vessels. If the PPHN was primary, then the arterioles and capillaries are thick to begin with, and there’s no way to reverse this anymore. If it is secondary, it means that the arterioles or capillaries have thinned out for postnatal life but then became thicker as a response to/result of an insult/injury. Despite proper ventilation and support given to the baby, he succumbed to PPHN after several days.

Posted by drclintonb on September 8, 2012 in neonates, Persistent Pulmonary Hypertension of the Newborn